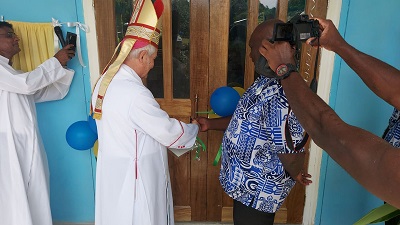 Led by a self-taught and creative handyman Mr. Paul Buare, the small community sets out its plans to build a new church in early 2017. The usual one or two weeks new year’s festive celebrations of 2017 had to be cut short and concluded earlier than planned in order to commence the church project.

With materials purchased a few years prior, members of the community wasted no time as they set out the profile with guidance and watchful eyes of one of the most experienced and qualified builders Mr. Daniel Sevio who was engaged to guide them laid the foundation of the new church building.

Once the profile was set, there was no turning back for the community. Men, women, and children joined forces and ensure work progressed as planned. Foundation was dug, sand and gravel were brought in, concrete was mixed and poured whilst women cooked and prepared food for everyone involved each day they worked on the church.

A sense of purpose, oneness, and community spirit was evidenced and transpired as a result. A small community cooperated and participated fully to complete and achieve their mission.

Over the next 4 years, despite many difficulties and challenges the villagers faced, they did not shy away from the mission to complete their church.

Many fundraising drives were organized and held which help to bring in much-needed cash to purchase materials and continue with the work. Contributions by community chiefs from their royalty proceeds and others were also received.

Community members residing in Honiara were also organized and ran fundraisings to support efforts back home.

After 4 years of hard work and commitment, A small community came alive on December 22nd 2021 as they witnessed the grand opening and dedication of their newly built church which they dedicated to the patronage of St. Michael the Archangel.

Many from surrounding communities arrived and shared the joyous moment. Gaomai Community where the guest community for the opening has been given the honors to perform the customary Nunuke which involves the traditional custom of Iloilo (Hatahataba), Ehu and Asipa in accordance with local customary practices.

Bishop of Gizo, His Lordship, Most Rev Luciano Capelli blessed and dedicated the new church.

The celebrations concluded with feasting and entertainment.