Diocese of Gizo in the Solomon Islands

The Diocese of Gizo is one of three Dioceses in the Solomon Islands and was formed from the Vicariates of North and South Solomons in the early 1960s. It encompasses three Provinces: Choiseul, Santa Isabel and the Western Province. It spreads over an area of 12,600 square kilometres, populated by 129,000 people, of whom approximately 14,000 are Catholics. There are seven Parishes, twelve priests, twelve Dominican Sisters and eight brothers (four Marist, two Dominican and two Diocese).

There are a few larger settlements. Gizo, a town of 3,500, is the headquarters of the Diocese and is an administrative centre for the Western Province. Noro, the offical overseas port for the area, has a fish cannery and other light industry. At Ringi Cove is one of the few sustainable logging industries in the Solomons, and Taro, the Provincial Centre for Choiseul also is a small administrative centre. Otherwise, most of the people of this area live in small coastal villages, acessible only by outboard powered canoes.

In 1956 the first group of Australian Dominicans arrived to assume responsibility for the Diocese of Gizo which was created on the 15th of November 1956. The first Bishop was Eusebius John Crawford OP who was appointed Bishop on the 1st of March 1960 and retired on the 3rd of February 1995. 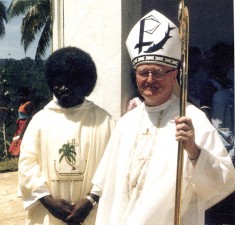 The Diocese consists of seven parishes, all of them spread over several villages. Catechists care for the Catholic needs of these communities on a day to day basis, supported by regular visits from the Parish Priest.

Education has always been a priority for the Gizo Diocese. During the 1950s and 60s, Catholic primary schools were established in several centres, with many young people travelling to them from outlying villages. With Independence in 1978, the Solomon Islands Government took over these schools, establishing in the process mostly village schools. A recent development means that most will again be coming back under the control of the Diocese. In Gizo there is a thriving kindergarten which has prepared children for school and there are three Regional Training Centres, at St Anne's, Nila, (for girls), at St Dominic's Vanga (for boys) and a Community college, St Therese's Wagina, for young men and women of post- school age.

The future of the Gizo Diocese will be strengthened by the further education of its people. There are several young men and women training for the priesthood and the religious life, and the role of the laitiy is a very important one here as in the the Catholic Church as a whole. A Pastoral Centre has been established at Moli, on the Island of Choiesul, where catechists are trained for their important role in the life of the Church. Over the last few years, representatives from the Movement for a Better World have been promoting Renewal throughout the Parishes to engage all Catholics in the life of the Church and in planning for the future. 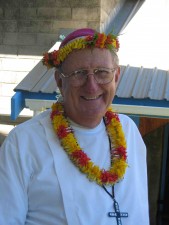 Bishop BernardFather Cyril O'Grady OP was appointed as the second Bishop on the 3rd of February 1995 and ordained Bishop Bernard O'Grady on the 19th of May 1995. 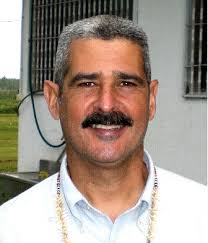 Bishop Chris
Bishop Chris Cardone OP, for many years a priest of the Diocese, was appointed Auxiliary Bishop on the 27th of March 2001. On the 12th of December 2004, Bishop Chris started new duties as the Bishop of Malaita, succeeding Bishop Gerry Loft who retired at that time.

Bishop Luciano Capelli was ordained Bishop of Gizo on October 21st , 2007 at Gizo by His Eminence Cardinal Joseph Zen– Cardinal of China. 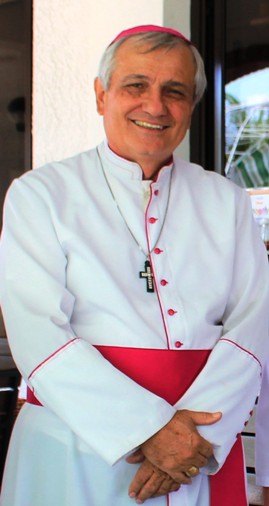