On behalf of the 6 of us from the Diocese of Gizo, especially Rose, Cecilia,  Dennis, Joseph and Cletus, we would like to forward our biggest thanks to Pittwater Parish especially to Simon Hyland and his family and Michael and Christine Shanahan for nice accommodation, food and the medications for our health.  Their nursing was like a really Mother to us (Better than public Doc's  here).  Also to Adam Ahern and other members of the Soul Group who provided us  support and liaison. Adam who was absent during the farewell night he was sick but after he managed to got up and said goodbye to us.

Not forgetting Father Rex Curry, the Parish Priest of Pittwater plus the Parish Council who were most supportive of the project and Bishop Bernard
O'Grady who helped make us welcome. Big Wan tumas long- The "Fund Raising  Committee" Susan Berg the Chair of the Parish Council, Simon, Adam, David and Penny Kerr who organized the fundraising for us.

During arrival and when departing we were treated equally and we really feel  like at home. Your help will never forgotten. We have much to tell to our
parents, Friends, School Mates and Youths.

Lastly thanks for the Gifts from Pittwater and they will be our souvenir from Australia.

On behalf of Solomon 6

A three days youth rally was organized by the Gizo catholic youth, parallel to the world youth day event celebrated at Rio de Janeiro, Brazil by Pope Francis and youth representatives, from all over the world. Various outer Islands were represented and, participants, challenged to echo the experience back in their island communities

The events included topics and activities to enable the youth to discover their uniqueness and express their views and commitment to face the challenges and pressure of today's modern world. Various speakers reflected on different topics relevant to the yearly theme" go and make disciples of all nations"

The spill over effects of the Bougainville crises and the social unrest on Guadalcanal – Solomon Islands, became the driving force that prompted the then Bishop of Gizo – Most Rev. Bernard O’Grady OP to establish the office of Youth and followed by the appointment of a Diocesan Youth Coordinator –Mr. Joseph Lalaubatu in early 2001. Sincere thanks to our Bishop for seeing the need of our youths.

Bishop’s great concern was the involvement of many youths in these crises and subsequent violent and victimizing effects that have on most youths and their communities. As Bishop, he knows that he has a responsibility of love and pastoral care for the Spiritual and social well being of our Catholic Youths through the creation of the youth office.

The establishment of this Diocesan Youth Office is to coordinate, facilitate and make available necessary trainings, activities and resources for our Catholic Youths in the Diocese. The overall aim is to integrate the various activities targeting youths in a holistic approach that is spiritually, intellectually, socially, culturally and economically.

Since then, youths have been very much involved in a lot of community, Parish and Diocesan programs and activities. The impact of various youth program implemented in the last six (6) years on the lives of our youths is one of Spiritual recognition, Community awareness and Youth personal involvement in the Church, youth related activities and issues of common concern in the Diocese. Thus, these aspects of youth issues awaken our Community and Church leaders to pay more attention to the needs and aspirations of our young people. Youths themselves were also aware of their God-given gifts of service for the community and the challenges ahead.

Sport is one way to bring Youth together

Presently, we have more than 10,000 Catholics in the Diocese, of which more than half are youths. A total of 27 youth groups were formed in the five (5) Parishes of the Diocese. We also started Campus Youth ministry in the Secondary Schools with the help of parish Priests and Teachers.

To effectively coordinate and implement the organization’s formation and the consistency of program activities is a great challenge, due to the geographical & isolated location of the Parishes in the Diocese. Transport and communication are very much needed as islands were scattered from each other.

Finally, I sincerely thank the then Auxiliary Bishop of Gizo, now Bishop of Auki – the Most. Rev. Christopher Cardone OP as our vicar who was very instrumental in the formation, organization and mobilizing of our youths in the Diocese. Thanking you for your great support, patience and understanding.

Today, the fourteenth day since the Major earthquake which devastated many parts of the Gizo Diocese in the Solomon Islands, the World Youth Day Cross and Icon left the island of Ghizo. It has been a remarkable 24 hours during which the Cross brought together people of all ages and allowed them some respite from the Earthquake and Tsunami which have been the total focus of everyone.

For about an hour before the Cross arrived, Gizo itself was remarkably empty. Hundreds of people had gathered at the only intact wharf and there was more excitement and happiness than there has been for a fortnight. Everyone was very good natured with no pushing or jostling. Despite the extra smiles a sombreness still affected the people; the fact of 53 or more dead, people still missing and thousands of homeless will continue to dampen the normal happiness for many months or even years yet.

The talented Pan Pipers from Vanga Training College led a parade from the wharf to the front of the battered Cathedral where Bishop Bernard O'Grady O.P. welcomed it.

The Cathedral has become a symbol of people and places badly damaged but not destroyed. Although the tower and front of the Cathedral have been severely damaged, the glass cross in the tower escaped destruction and the WYD Cross was slowly raised in front of it to link the two Crosses, signify a rising-up and as a mark of respect.

The Cross was then lowered and taken with the Icon in procession to the side of the Cathedral where hundreds of people gathered in the open. Earlier that morning, several hundred people had attended the open-air Mass in the same location.

There were speeches of welcome and talks about the history of the Cross and Icon with prayers and singing. The Youth of Gizo and a number of surrounding Parishes spent the entire night in the presence of the Cross and Icon with times set aside for singing, prayer, sharings and special silence periods. Minutes after retiring somewhat after midnight, he Bishop and this author leapt out of bed as the Panpipers starting playing in front of the Bishop's House. The nearby Gizo Hotel has often been guilty of playing loud music until about 2.00AM but for the first time ever, the Catholics had their revenge with singing and Panpiping until well after 3.00AM!

The Prime Minister came to town a few hours after the Cross. He is here to personally review progress of relief efforts. This is indeed a good thing, but the focus that afternoon was on the Cross and Icon with many people being unaware of the PM's visit.

Monday morning, a small turnout was expected for the Mass. However, yet again hundreds of people arrived. The Mass was a wonderful experience with the Bishop and six priests concelebrating. It went for a couple of hours with much singing, Custom Dancing at the Offertory and another powerful and down to earth homily linking the symbolism of the Cross, the readings of the day and the experiences of the Earthquake and Tsunami.

After Mass, the Cross was taken several kilometres to “Two Mile” which is one of the camps for many of the displaced people. It was then taken down Gizo's main street and back to the Cathedral. A planned visit to the hospital was called off as nearly all patients have been moved to Munda Hospital on New Georgia Island with others being treated at a field hospital up on the hill.

Finally, after many of the Youth had written names and messages on the carrying cases, the Cross and Icon were packed back into the carrying cases and the 300 Kilogram load was carried back to the wharf for the trip by boat back to Nusa Tupe and then Honiara where crowds of 2,000 or more had previously welcomed it with 1,000 of them walking for hours and carrying the Cross and Icon into the town and Holy Cross Cathedral.

The Youth did a fantastic job organising this special event. While doing that, they also cleaned streets of debris, fed the hungry and carried tons of rice backwards and forwards between ships, storage areas and helicopters. Many adults were also involved. We all felt the vigour of youth and everyone came together in a special way.

Overall, this was a memorable occasion, not only for the local people, but also for many of those providing aid who remarked on the crowds and “pulling power” of this simple but powerful Cross and Picture of Our Lady and Child Jesus. It went a long way towards helping people as they slowly recover from their traumatic experiences and fears of further disasters as small tremors continue to rock the ground several times a day.

© D Kerr 2007. May be reproduced or distributed freely in any format with acknowledgement

A total of twenty two youth of St Dominic Parish, have attended the youth Encounter Program, which was held at Sirovanga mission station on the 10th - 12th May 2013. The program was facilitated by Sr. Teresa Tebaia Op, Deacon Stephen Op, Postulants, Jennifer and Augustima and myself.

By Penelope Kerr
This is the final WYD08 update for the six pilgrims to Pittwater. After World Youth Day's Final Mass on Sunday, the Pittwater Solomon Islands Pilgrims spent two days recovering. They went into Randwick Racecourse on the Saturday and slept in the open with approximately a quarter of a million other young people. The Papal Mass was a huge affair which will leave lifetime memories.
On Monday they celebrated Mass at the Maria Regina Church, Avalon, where Bishop Bernard lives. Photos click here. He and the parishioners welcomed them warmly and some parishioners stayed back to join them at Morning Tea in the Presbytery. The rest of the day was spent back "home" at the Shanahans though some of the group walked down to experience the joys of the large supermarket in Mona Vale. 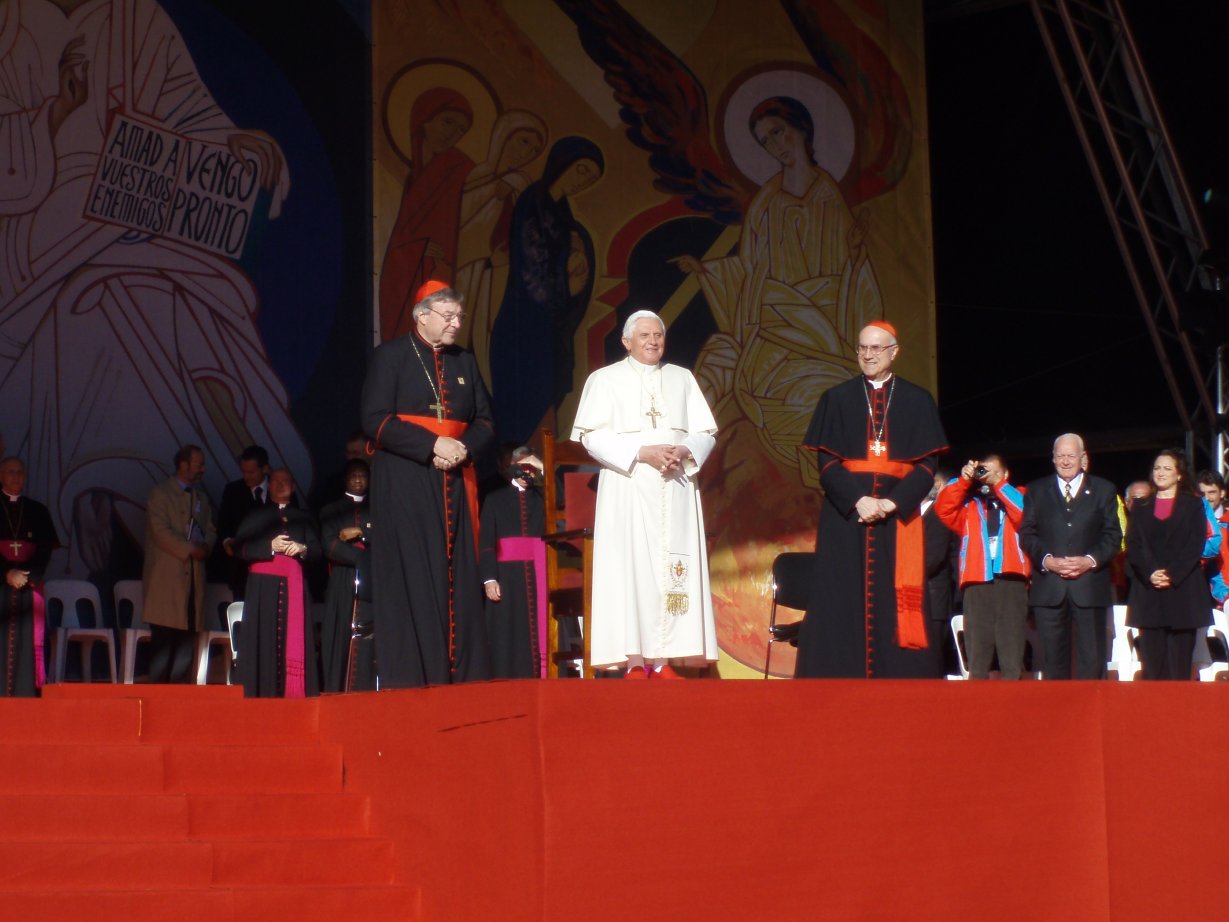 On Tuesday, the six joined with 17 pilgrims from Tennessee in the United States for a cruise on Pittwater. They went onshore for lunch at the Basin, a popular picnic spot, where they were greeted by kangaroos and native birds, quite tame because they are so used to people.

Tuesday night saw the final farewell, an Italian Night in the Parish. See the photos- click here. About 200 people enjoyed great food, good company and even some dancing, though this was limited by the crowded quarters.

By Penny Kerr with updates

The photos here are from the truly wonderful Stations of the Cross held in three locations on Friday. 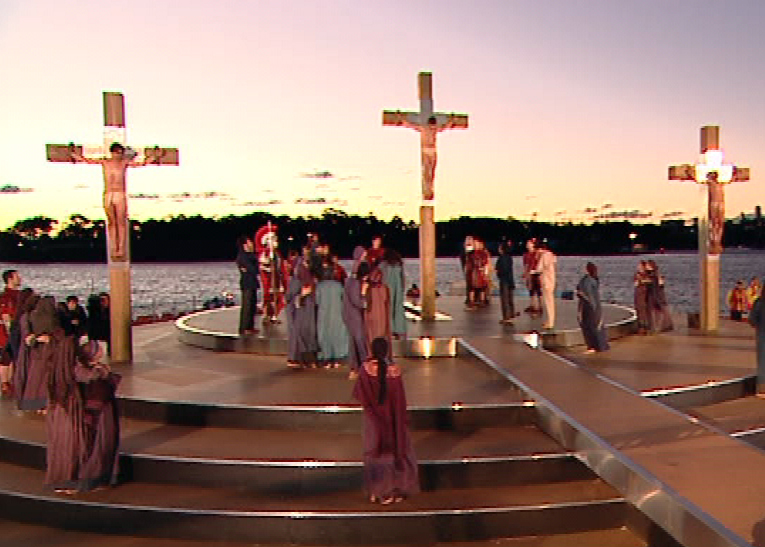 The biggest group of Solomon Islanders is located at Oak Hill, to the West of Sydney. It is quite cold out there but people have been provided with warm clothing. Unfortunately, lots of youth caught flu and about 50 people were kept isolated there so it would not spread to everyone. This was unfortunate because they missed activities. However, the good news now is that they are all much better.

The group sponsored by the Dominican Sisters is staying a little closer to the city and things are going well. They have been amazed by the huge shops, vast crowds of people (sometimes as many pilgrims as the total population of the Solomon Islands! Sr Teresa has been heard to say "FEARFUL" several times!